Demo Reviews in fewer than 500 words 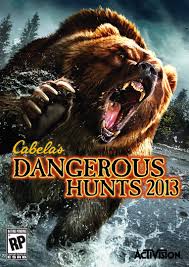 Cabela's Dangerous Hunts 2013 for the XBOX 360 is an interesting subgenre of the ‘First Person Shooter’, namely big game hunting. It leaves me in a weird Limbo, I’ve never had any qualms about shooting aliens, Nazis or dinosaurs (if you ask me T-Rexs have it coming with their tiny arms and beady eyes). But shooting gazelle and leopards kind of takes the fun out of it.

They try there hardest to put you at your ease. The majority of things to kill attack you first, or at least they would if they were given half a chance, so you’d better sneak up on them first. Which brings me to the big bug bear of the game, there is so little Hunting done. Okay you get to kill a menagerie of beasties, but there’s no stealth involved. You just go from one animal attack to the next, carving you’re way though the endangered species list.

The aiming system feels like it’s designed for snipping. You use the sight to aim, then you hold your breath and time slows down. You zoom in a little bit more, have vital organs highlighted and you can hear you heart beating. All very atmospheric, that is until you start playing the game, at that point you get hunted by creature after creature and just use the shotgun.

Shockingly the quick time events are used to good advantage. When you get attacked from the side or back you get time to press the B button and spin around so you can shoot the baboon in the face. The down side is you then hit a slow motion event and it expects you to aim for the heart. That would be fine, it the aiming system didn’t then turn into a pile of sticky goo.

There is a ‘Hunter’s Sight’ function that you’ll only use when you’re lost. Stolen directly from Batman: Arkham Asylum the screen goes grey and you get highlights as to the whereabouts of health and ammo packs as well as hidden creatures and things to find.

A good point was picked up by my non-gaming partner, why are there first aid kits and ammo just lying around on the African plains? I know this is the norm for these sorts of games but it doesn’t it just shows a lack of creativity, all we ask is you say something about a relief drop in the area. The unrealism isn’t helped by the creatures dissolving away in front of your eyes, at least let me turn my back before getting rid of the body.

The demo leaves me thinking “I don’t want to shoot a hippo in the face”.