The First Templar
Demo Review’s in fewer than 500 words

I can’t believe it’s not butter. Or if you’re going to rip off a franchise at least get its core awesomeness right. 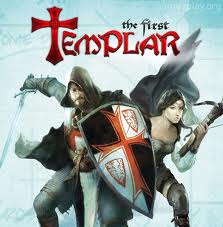 From its cover art you can see this game is trying to be associated with ‘Assassins Creed’. The problem is it misses the mark by a quite a way. Rather than understanding what makes AC popular Haemimont Games decided that it’s all about Templars with swords.

What doesn’t help to sell this game is the cut scenes, Haemimont Games is based in Bulgaria and the cut scenes are dubbed into English. The problem is the lip sinking is off and it feels like a kung fu film.

The difficulty variability is basically non-existent. I played it through the first time on easy to get a feel for it, when I tried again on hard there didn’t seem to be much more of a challenge until the end of level boss.

The RPG elements are nice. The system works with experience points that you spend on gaining skills in four key areas. Its equipment and weapons seem somewhat lacking and you can’t mix and match what you’re wearing.

The system for fighting is a chain command, along the lines of once you’ve unlocked it you can press X X B and it’ll perform a certain move. This does lead to a lot of button bashing but it seems to work for it, the movement between enemies is fluid and they give you a handy cross over an attacker’s head to let you know when to get your guard up. One thing this fighting engine does do over AC is not leave you feeling like the guards are going to line up to have a go and really get stuck in.

You also run around with a buddy, if you’ve played any games like this before you’ve probably got a bit of a worry on that he/she is going to run off and get themself stuck in a bush the first opportunity they can. But within the demo I didn’t see any signs of the follower having less brain cells than a fungi culture, so if we’re lucky they may have spent some time working on this. Its main purpose for being there is to allow two player options, obviously this isn’t accessible via the demo so I have no idea how they implement it. One downside is the revival command, if your buddy gets beaten to a pulp you just have to walk up to him/her and press B. Usually in this style of games you have to hold the button down and wait for a short time while you’re vulnerable, this gives you a decision to make and adds a depth to the game’s combat. Not in this though, all you do is tap the button and they get back up fighting.

All in all I would say the demo doesn’t do this game any credit, they’ve forgotten to put in the bits that will make you stop thinking it’s a poor ‘Assassins Creed’ clone. But you can pick the thing up for under a tenner and I’m sure it’s got a good few hours in the thing, especially if you’re going to play with a friend.

By Chris Nicholls.
Powered by