STAR TREK: THE NEXT GENERATION: Q-SQUARED 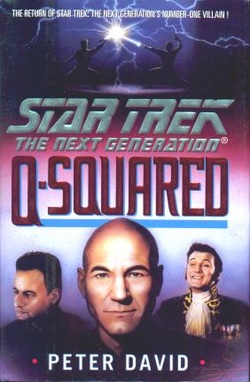 "While on a mission to the Planet Terminus, three parallel Enterprises find themselves in great danger when the entity known as Trelane discovers a power unlike any other. Soon, Captain Jean-Luc Picard and his crew are caught up in a battle not only for their lives, but for the very fabric of existence itself."
I'm going to be totally honest with you here, this one of my all time favourite novels, not just within the Star Trek universe but across the board.  The author Peter David weaves a detailed tapestry of plot and characterization I've rarely seen in a Star Trek novel and it shows.  It tells the tale of an encounter with Trelane, the erstwhile Squire of Gothos from the TOS episode of the same name, who is quickly revealed to be an adolescent member of the Q Continuum and godson of Q.  Being the equivalent of an hormonal teenager and having the power of an omnipotent being you can imagine how things turn out moving forward.

Any story involving the inimitable Q is well worth experiencing and none more so than this one, with a cross-dimensional parallel universe storyline so complex you could be forgiven for imagining it wouldn't make any sense.  Fortunately David has taken the time to fully research every facet of the lore he chooses to include and while the dimension jumping could have been confusing he ensures that the reader is informed of every change of Track.  What I mean by Track is the books indication of change between the three universes seen here.  Track A is a modified version of that which we all know and love where Jack Crusher was never killed in the line of duty and commands the Enterprise-D with Jean-Luc Picard as his first officer.  Track B is the version of the Enterprise we should all be familiar with and Track C is a take on the parallel timeline seen in the TNG episode "Yesterday's Enterprise" with one important twist: upon discovering the Enterprise-C Picard discovers that the crew is already dead.

I cannot begin to describe the level of referencing and fan service included in this book, which even includes a trip back in time to the Enterprise of James T. Kirk and an interesting explanation of his middle initial was 'R' in a particular episode.

To go any further into detail about the books plot and various twists and turns would invariably spoil it for any of you whose interest I may have piqued, so go read it.  I insist!

On a final note, the audiobook of this novel is well worth a listen mainly down to the superb reading by Q himself, John DeLancie.  Whilst heavily abridged, the story is still complete and cohesive. The star of the show is definitely DeLancie's anecdotal reading style, which feels almost like Q himself is telling you the story ensuring of course to make Picard's dialogue sound as pompous as possible.
by Darryl Fenix
Powered by